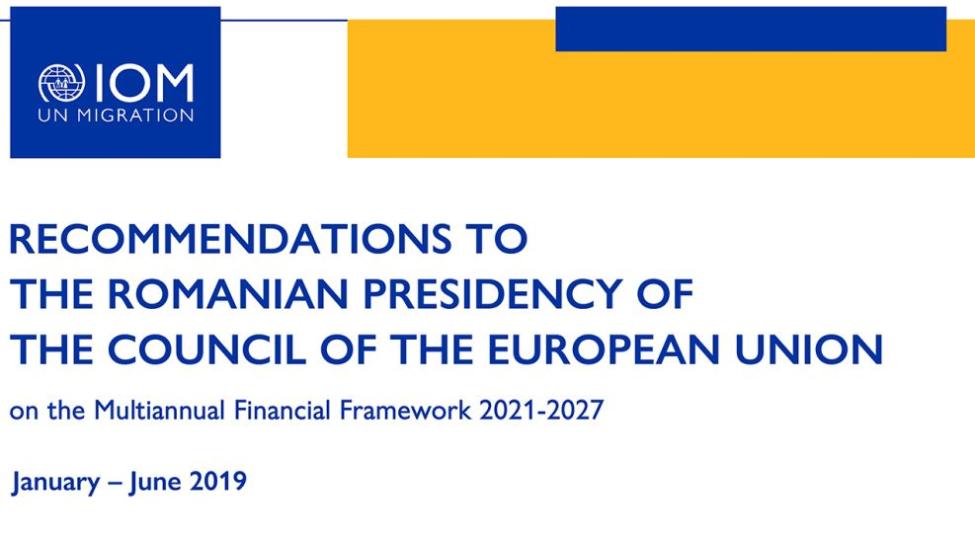 Brussels – The International Organization for Migration (IOM) last week (22/01) presented four recommendations on migration to the Government of Romania, which took the helm of Presidency of the Council of the European Union (EU) on 1 January 2019 for a six-month tenure.  The recommendations focus on the migration dimension of EU’s next long-term budget, the Multiannual Financial Framework (MFF).

“Romania will be leading the rotating EU Presidency through a critical period of substantial institutional changes for the European Union, and so ensuring the adoption of the EU’s next long-term budget will be a key priority,” said Manfred Profazi, IOM Senior Regional Advisor for Europe and Central Asia.

“Our recommendations are grounded in IOM’s view that the MFF should respond to the needs and commitments of the EU and its partners to ensure better migration governance in all of its dimensions,” he continued.

The Organization’s recommendations paper aims to promote EU migration funding that is more simplified, coherent and holistic, people-centred and rights-based, and increasingly directed towards legal migration and integration.

Given that migration is not a new or short-term phenomenon, IOM also recommends that policy and action on migration needs be implemented in a coherent and holistic way and should follow a long-term, strategic vision. Doing so would help to maximize the added value of EU financing, particularly considering the growing level of international engagement in this area.

EU migration funds are particularly instrumental in promoting the well-being of migrants and local communities in countries of origin, transit and destination. IOM believes EU funding should therefore be guided by international and European human rights law; ensure that EU actions are also gender-responsive and child-sensitive; and focus on integrating tailored responses, including for vulnerable migrants.

Finally, funding rules and processes must become genuinely simpler for implementers of EU funds to facilitate increased access and partnerships.

IOM's twice-yearly recommendations to the rotating EU Presidencies are guided by its Migration Governance Framework (MiGOF) which is the first, and so far, only detailed articulation of planned and well-managed migration policies.

IOM continues to encourage the EU and its Member States to promote a comprehensive approach to migration that puts the rights, needs, capacities and contributions of migrants at its core, with a view to ensuring their safety, dignity and human rights.

IOM's recommendations can be downloaded here in PDF.

Guide for safer employment of refugees

This is what you need to know about the fast track transfer from Ukraine to Romania, via Moldova