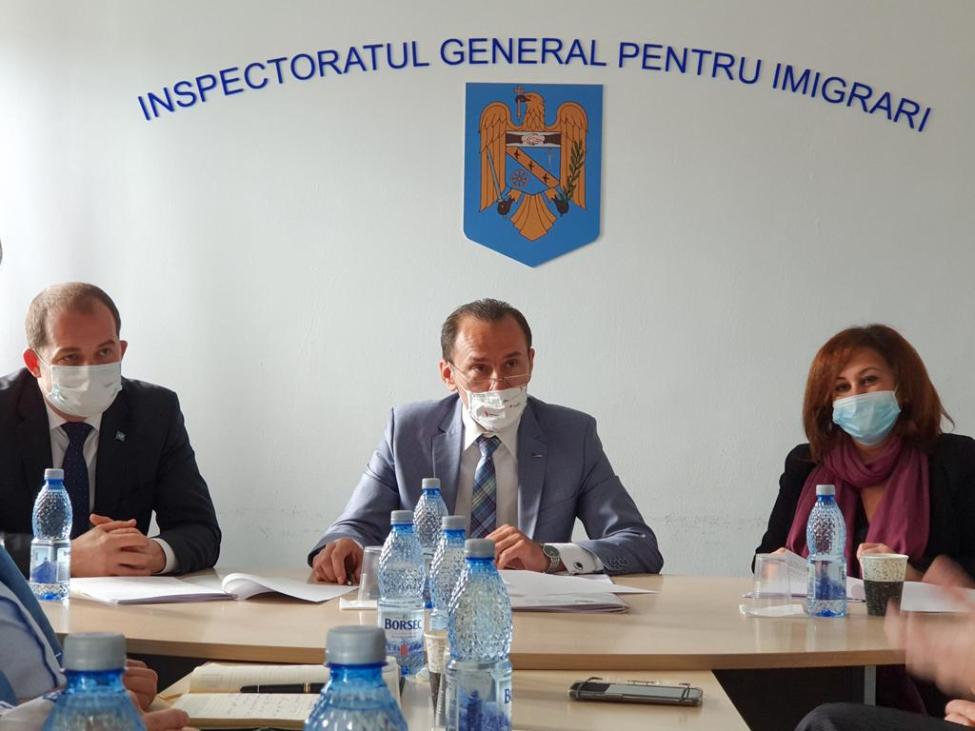 Bucharest – Today, June 5 2020, the document 'Working Arrangements for the Tripartite Agreement' was signed between the International Organization for Migration (IOM), the United Nations High Commissioner for Refugees (UNHCR), and the Ministry of Internal Affairs through the General Inspectorate for Immigration.

The document was signed by Chief Commissioner of Police Leonard Florin Medrega, General Inspector of the Inspectorate General for Immigration, Mrs. Nisreen Rubaian, Representative in Romania of the United Nations High Commissioner for Refugees and Mr. Mircea Mocanu, Head of the IOM Office in Romania.

The working arrangements set out in detail the responsibilities of each entity, the financial commitments and the specific activities that will be carried out during the implementation of the Agreement on the temporary evacuation to Romania of migrants in urgent need of international protection. Also, the workflow within the Emergency Transit Center in Timișoara (ETC) is set up, including responsibilities regarding the reception, accommodation, processing of migrants, internal order rules inside the center, etc.

During the meeting, the Inspector General, Chief Commissioner of Police, Leonard Florin Medrega, underlined the positive echoes that ETC has had at European and international level, being an example of solidarity in humanitarian protection, as well as a basis for coordinated efforts in creating sustainable solutions for refugees.

"We especially appreciate Romania's involvement in refugee protection in line with the commitments made during the 2019 Global Refugee Forum, despite the difficult times we are all going through," said Ms Nisreen Rubaian. "The resettlement of refugees through the Timișoara Emergency Transit Center allowed the rescue of over 3,000 refugees in extremely vulnerable situations, offering them a future in a new country," she added.

"We are pleased with the close cooperation we have had since the opening of the center with the Romanian authorities and UNHCR colleagues," said Mircea Mocanu, Head of the IOM Office in Romania.
"This example of solidarity from Romania shows that when refugees need support, we can provide a strong humanitarian response, with a global impact," Mircea Mocanu added.

The document, signed today, will enter into force on the date on which the new headquarters allocated to the Emergency Transit Center in Timisoara will become operational and will be in place for the entire period of implementation of the Tripartite Agreement.

The Emergency Transit Center, the first European facility of its kind, was established in May 2008. It was set up in accordance with a tripartite agreement concluded between the Government of Romania, UNHCR and IOM. The center has a capacity of up to 200 people and provides temporary shelter to refugees in urgent need of evacuation from the first country of asylum until their resettlement to other countries.